On October 18, 2018, leaders and pioneers from the disability research field gathered to celebrate the 40th anniversary of the National Institute for Disability, Independent Living, and Rehabilitation Research (NIDILRR). NIDILRR’s mission is to generate new knowledge and to promote its effective use to improve the abilities of individuals with disabilities to perform activities of their choice in the community, and to expand society’s capacity to provide full opportunities and accommodations for its citizens with disabilities.

See highlights from the event below and watch the full video of the event: Part 1, Part 2. 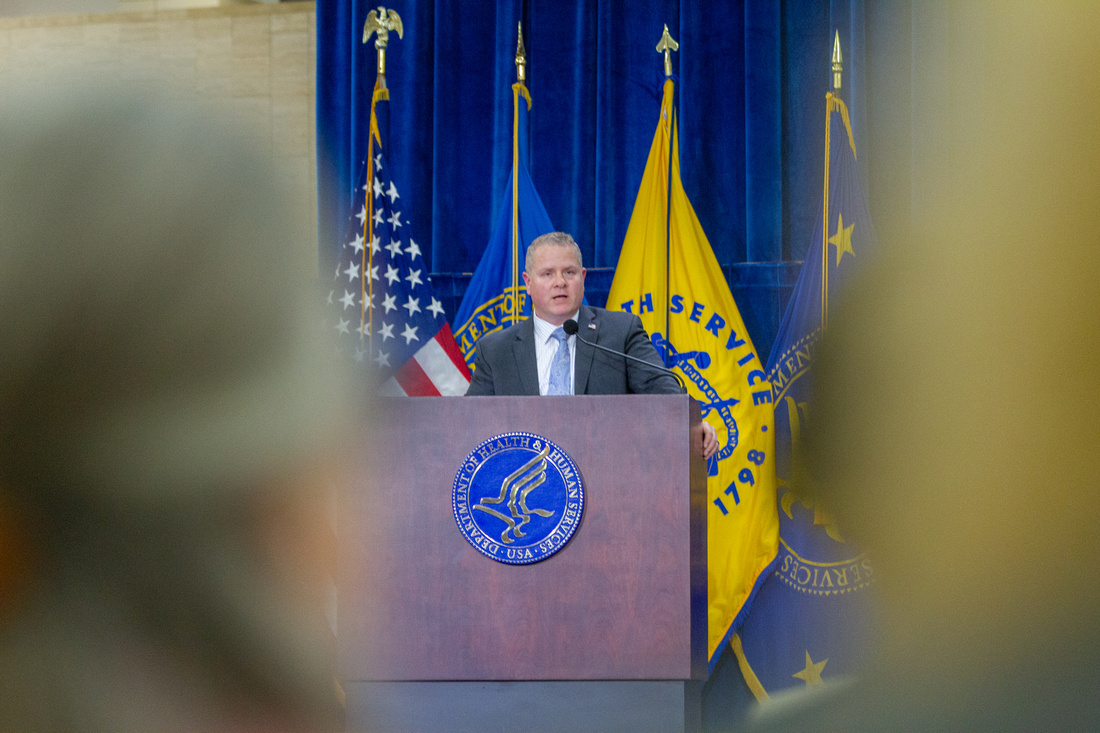 ACL Administrator Lance Robertson kicked off the event and introduced HHS Secretary Alex Azar. Robertson offered a brief history of both ACL and NIDILRR, noting that while the institute's name may have changed to keep up with the times, its mission remains just as relevant today as it was in 1978. "Ultimately, active community living and meaningful social participation for individuals with disabilities is the desired goal and outcome of the research and development initiatives that NIDILRR sponsors – which means ACL is exactly the right place for NIDILRR to be!" he said. 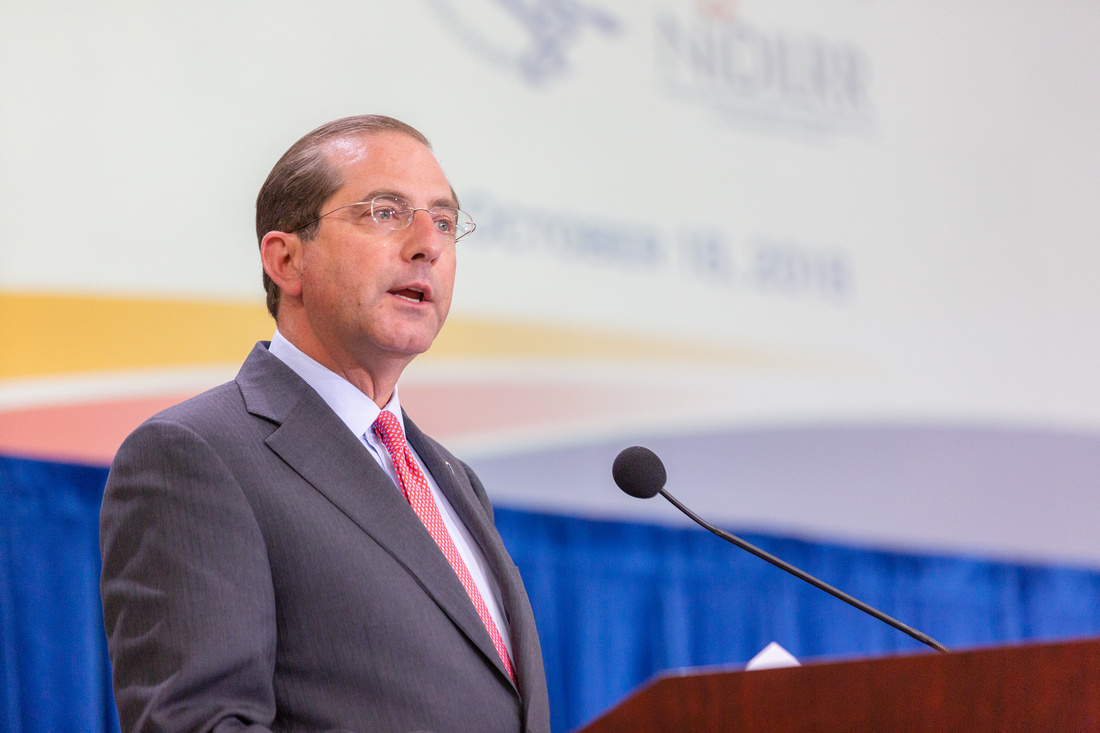 HHS Secretary Alex Azar discussed the importance of moving "from a healthcare system that pays for sickness and procedures to one that pays for health and outcomes." "That work will require improving coordination between the health and human services sides of HHS, including the Administration for Community Living," he added. "Advocates of independent living for people with disabilities have a lesson for many aspects of HHS’s work: All Americans, including those who are older or have a disability, are best off when they can live in their home and their community." He also commended NIDILRR's unique focus on longer-term outcomes including independence, community participation, and employment. 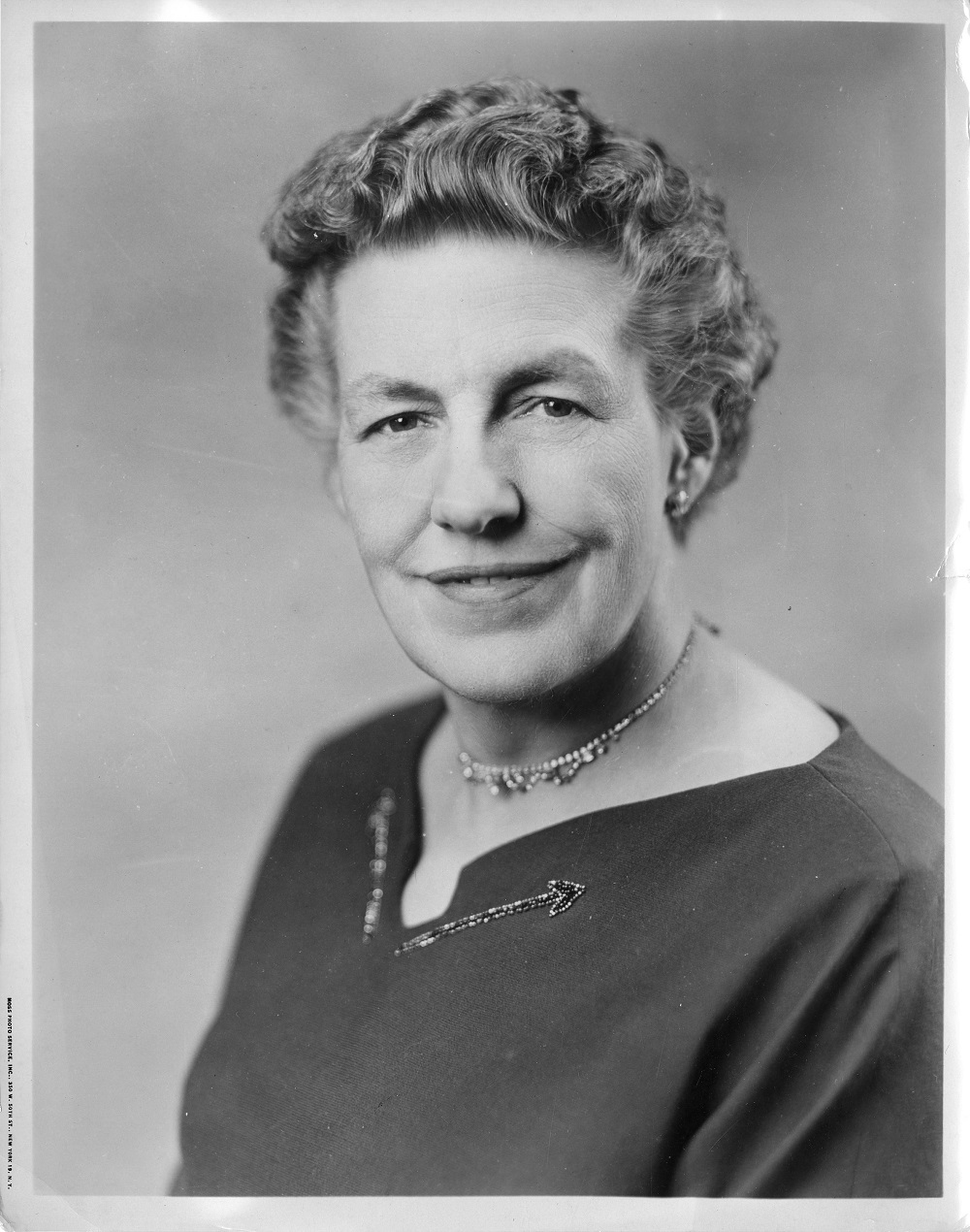 Secretary Azar traced NIDILRR's roots to the 1950s, and the vision of inclusion for people with disabilities championed by Mary E. Switzer, who led vocational rehabilitation programs at the U.S. Department of Health, Education, and Welfare. "Switzer was a pioneer, who helped shift the way our country approaches disability policy. Today, we recognize that community living should be the expectation for all people, and we are working to make that vision a reality," Sec. Azar said. (Photo: Acc. 90-105 - Science Service, Records, 1920s-1970s, Smithsonian Institution Archives) 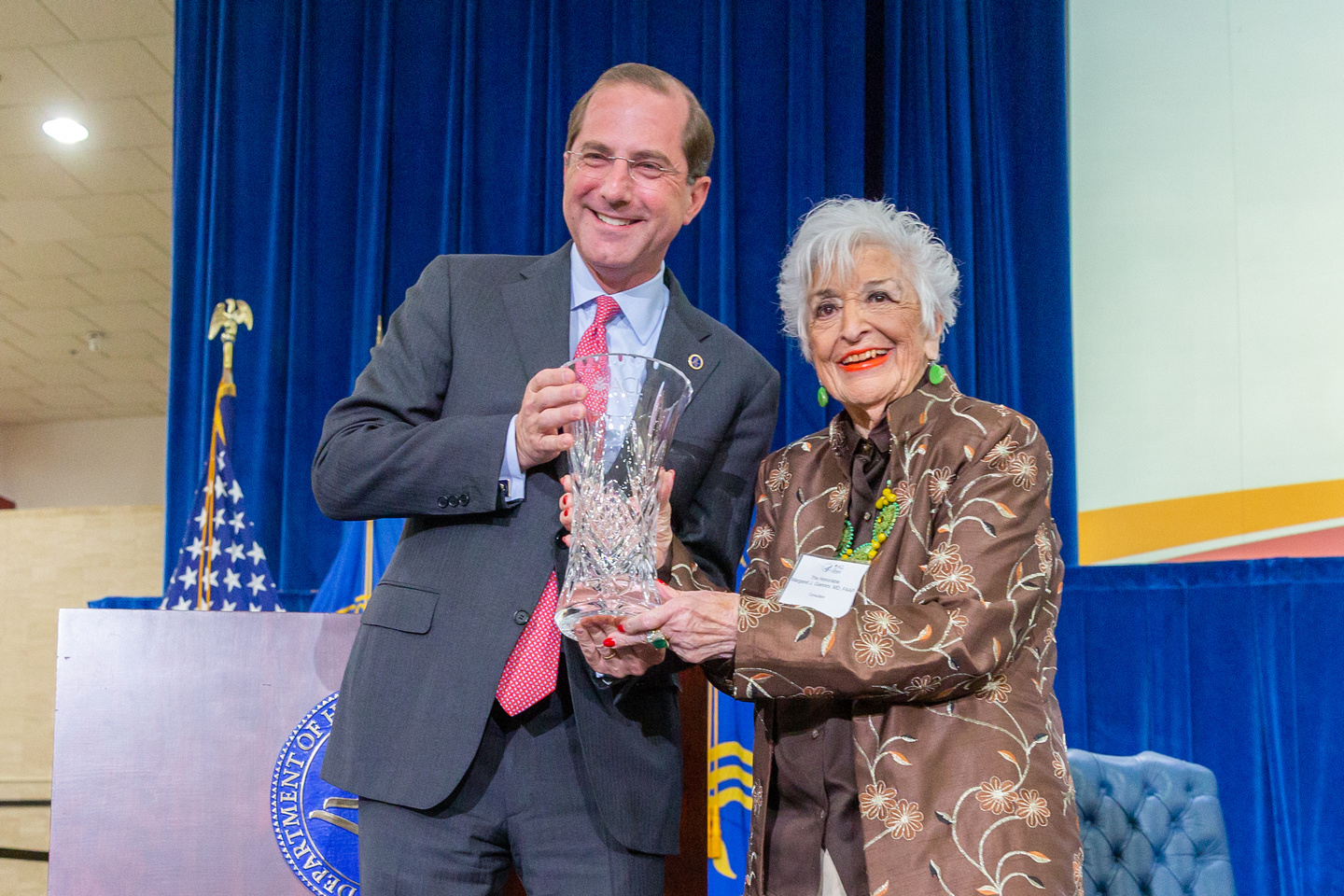 Secretary Azar ended his remarks by recognizing Dr. Margaret Giannini with the first-ever award for Lifetime Achievement in Advancing Community Living. Dr. Giannini has been a tireless champion for the independence and inclusion of people with disabilities of all ages. Her six decades of work includes serving as the first director of the National Institute for Handicapped Research (now known as NIDILRR). 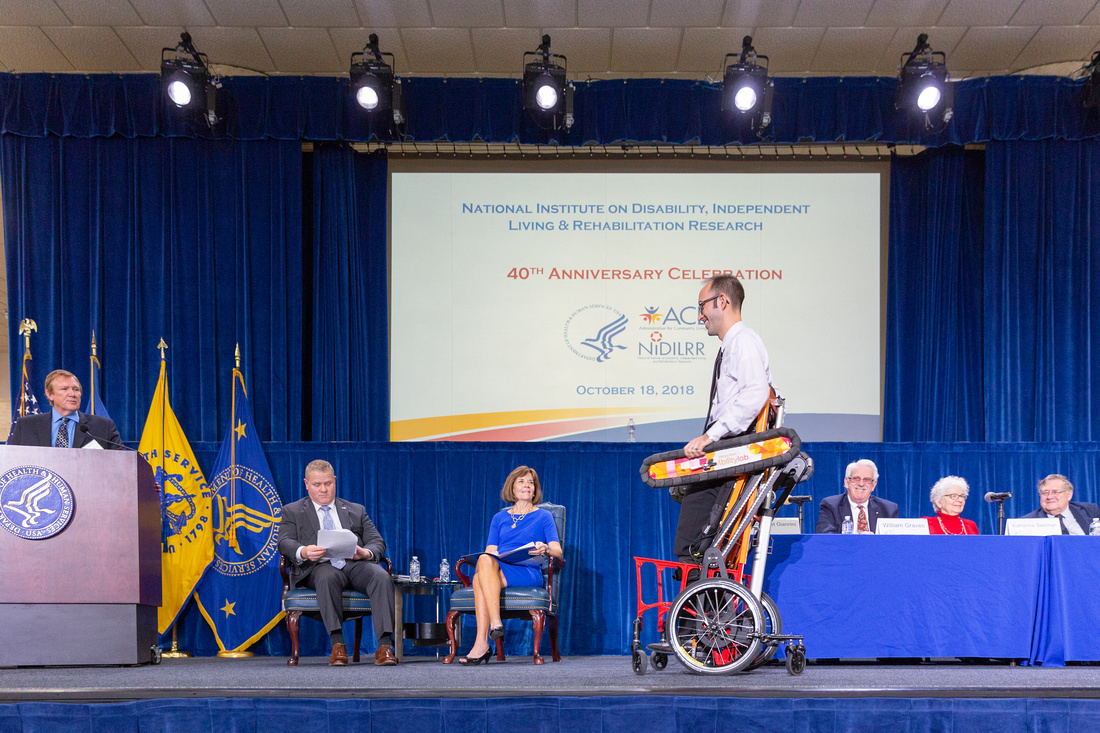 The audience saw an example of the innovations NIDILRR funds. Dr. Todd Kuiken and his team at the Shirley Ryan AbilityLab’s Center for Bionic Medicine are developing a manual wheelchair that allows users to move while in a seated or standing position. The "standing" position allows users to reach higher objects and to be at eye-level when interacting with others. It could also reduce some of the health effects associated with sitting for a long period of time. (Wheelchair demonstrated by Frank Ursetta). 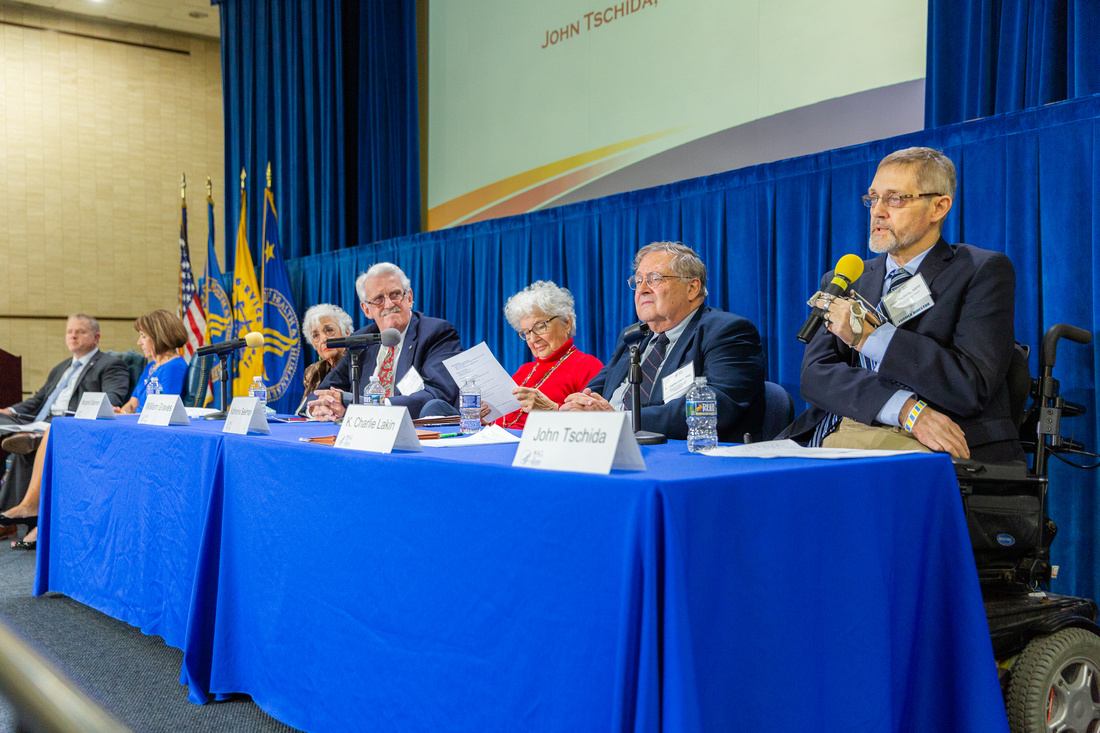 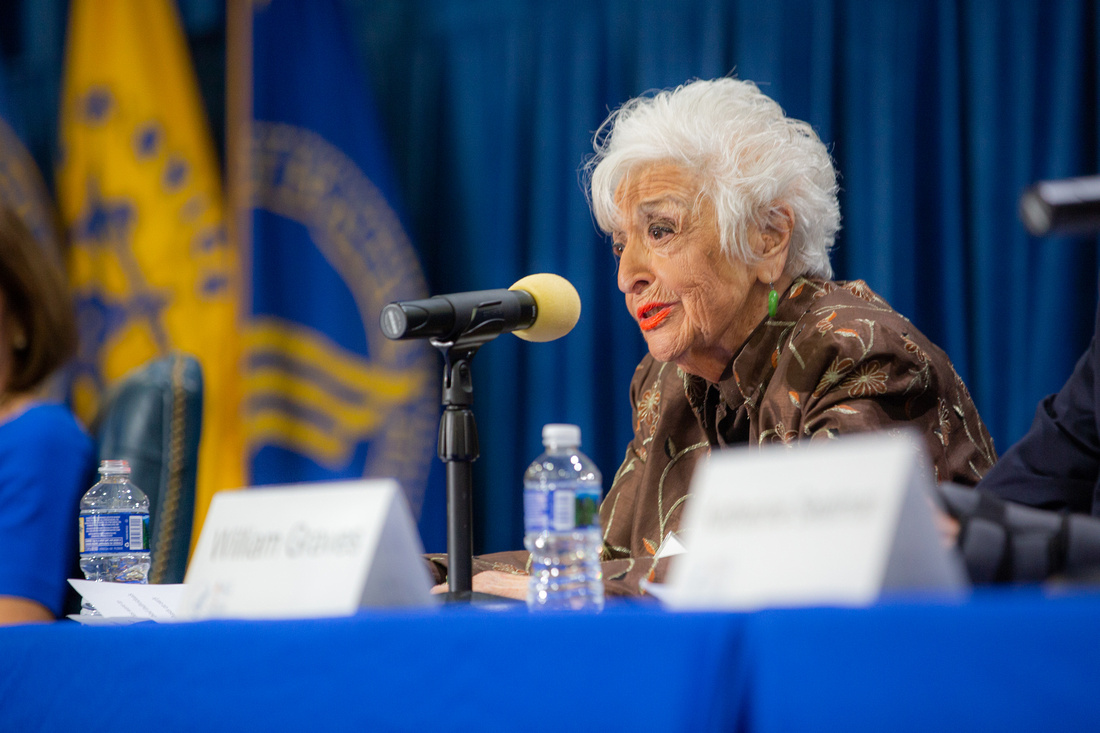 After receiving her award, Dr. Giannini said she was happy to be back "home" in the company of the NIHR/NIDILRR family. She discussed the early history of the National Institute for Handicap Research (now known as NIDILRR) and the importance of research that encompasses people with disabilities' entire day, from getting out of bed to work and recreational activities. People with disabilities, she said, "want to live, learn, earn, laugh, and love" like all of us. 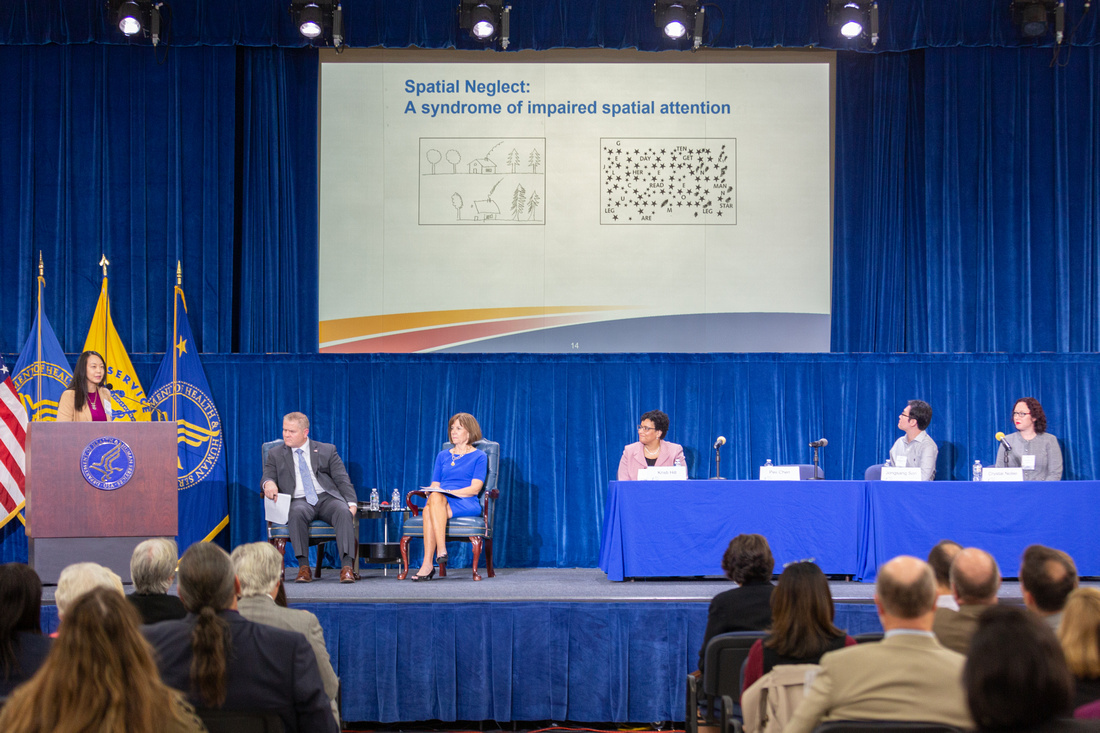 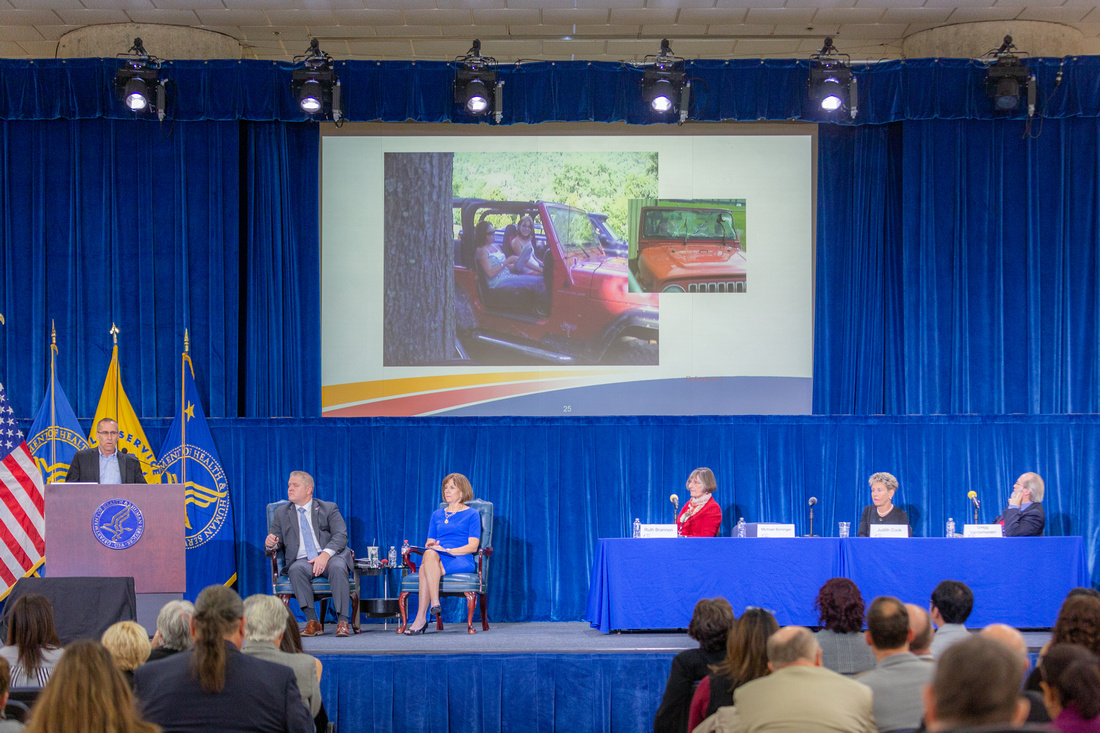 Michael L. Boninger, MD of the the University of Pittsburgh discussed the impact of NIDILRR's model systems for people with spinal cord injuries. He shared the story of Jamie, who was in a car accident resulting in a spinal cord injury. The longitudinal data collected through the model systems affected every aspect of her care and recovery, from her interdisciplinary ICU team, to an early depression screening, to encouragement to participate in sports. 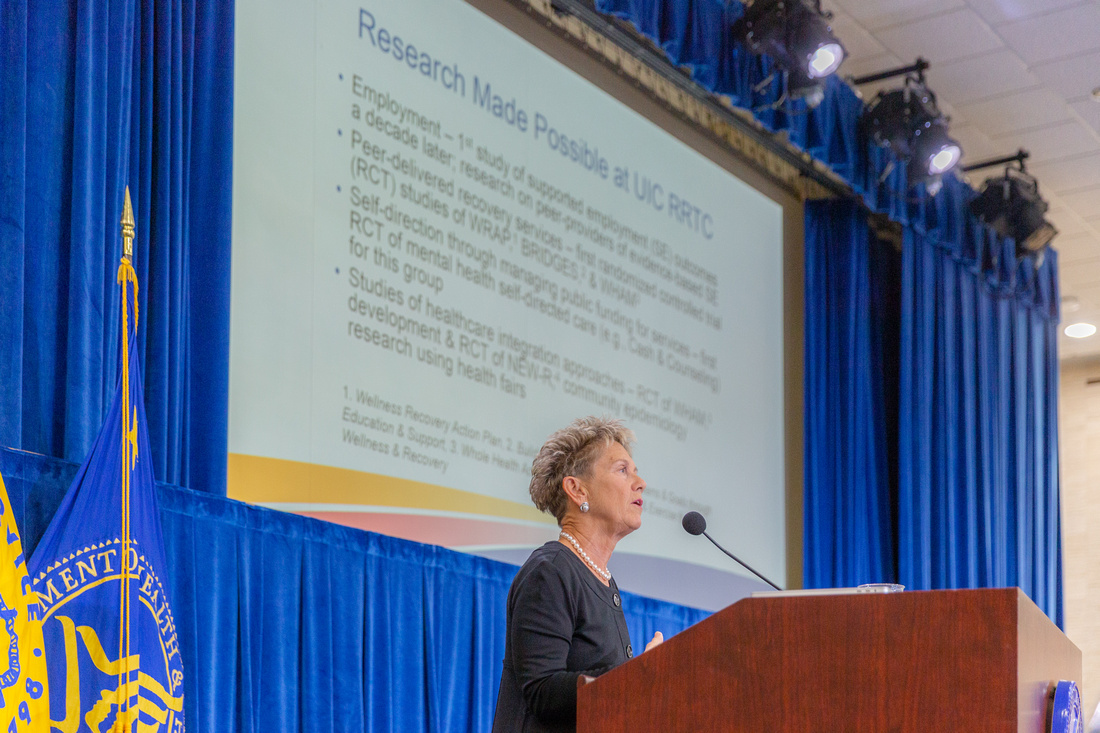 Judith A. Cook, PhD of the University of Illinois - Chicago talked about the impact of NIDILRR's work for people with psychiatric disabilities. She described how the goal of supporting individuals with psychiatric disabilities has gradually shifted from a "cure" model to a long-term rehabilitation and recovery model. She applauded NIDILRR's participatory process which includes people with disabilities throughout the research process, as well as NIDILRR's willingness to support "high risk, high payoff" studies. 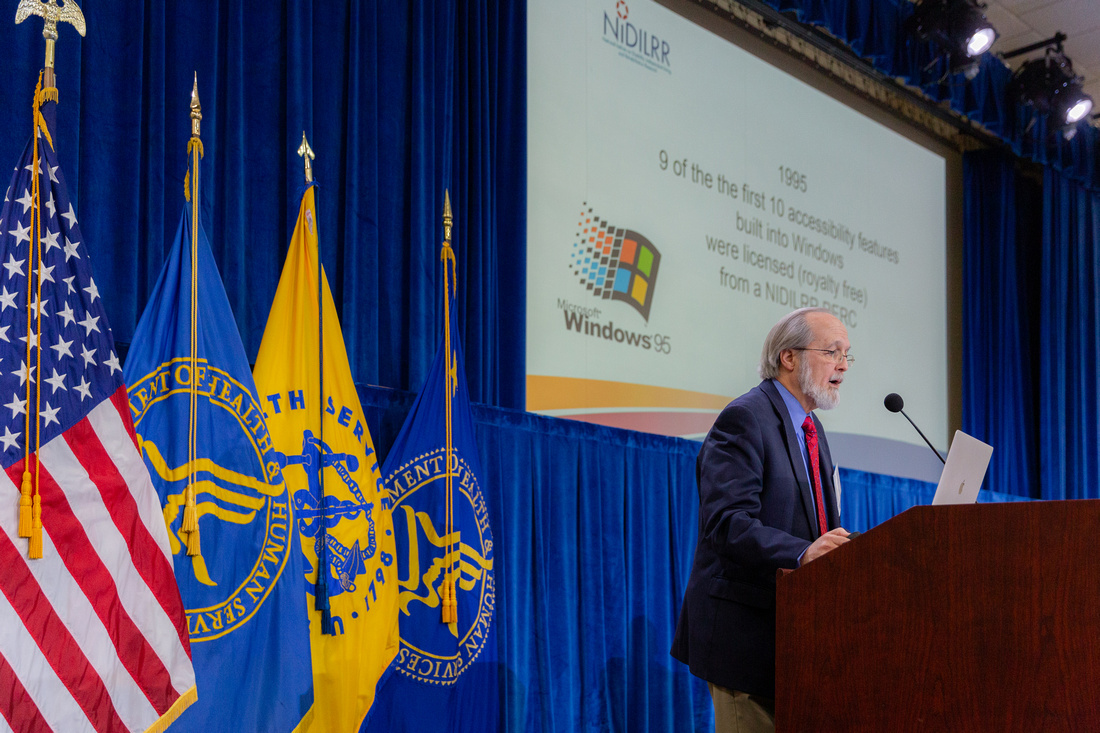 Gregg , PhD of the University of Maryland discussed how NIDILRR has helped make many of the most important technological developments accessible to people with disabilities. For example, 9 of the 10 accessibility features Microsoft built into Windows 95 were developed by NIDILRR grantees, and NIDILRR played a key role in supporting accessibility standards during the early days of the internet. 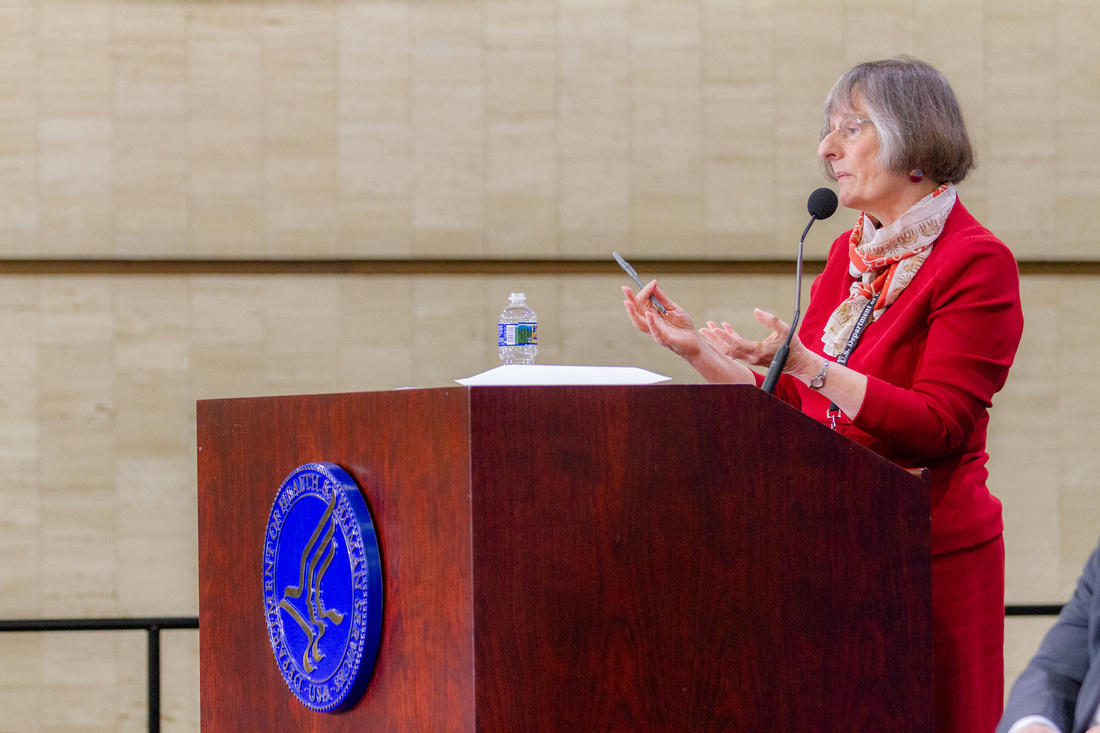 Ruth Brannon, Director of NIDILRR's Office of Research Science, reflected on her decades of work in the field of disability research  and her 21 years of federal service noting that NIDILRR has evolved and focused its work over the years. Ruth will be retiring this month and was honored by many speakers for her role in NIDILRR's success. 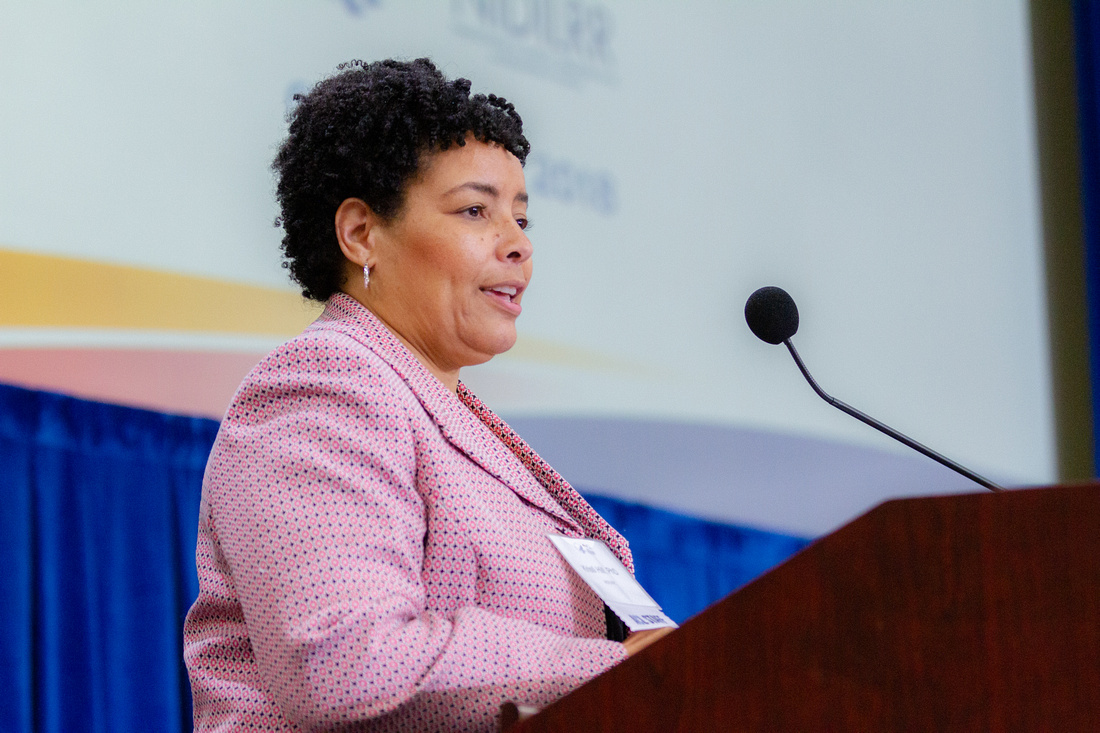 NIDILRR Deputy Director Kristi Hill, PhD spoke about NIDILRR's future including technology like automation and robotics, ensuring research is practical and applicable to people's lives, and expanding partnerships with other agencies and the private sector. But ultimately, she said, "NIDILRR's future is about people more than anything else." 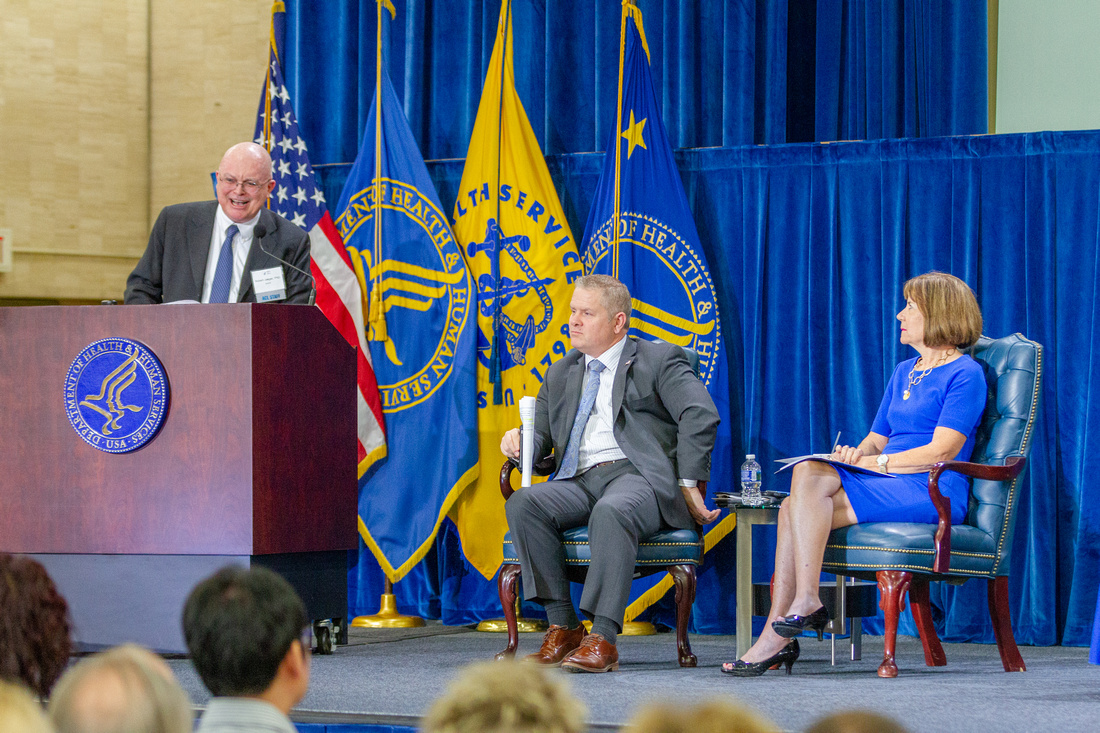 NIDILRR Director Bob Jaeger, PhD, closed out the program by reminding the audience of the words of the Declaration of Independence. "When I see people who have disabilities, I realize that they also have unalienable rights and when they can't exercise those rights, that upsets me," he said, reaffirming NIDILRR's commitment to uphold those rights. He also honored his mentor, Dr. Giannini, who he credited with inspiring him to enter the field of rehabilitation research.