“Leave No One Behind”: Reflections from the 70th United Nations General Assembly & Sustainable Development Summit 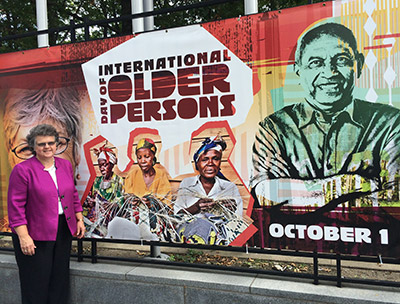 Last week, I joined colleagues from the Department of State and U.S. Agency for International Development as part of the U.S. Delegation to the 70th United Nations General Assembly.

At the meeting, more than 150 world leaders came together at a Sustainable Development Summit and formally adopted a new set of goals. A set of 17 specific, global commitments to enhance the well-being, security, and prosperity of all people and our planet, theUN Sustainable Development Goals chart a path forward for international cooperation for the next 15 years and replace the Millennium Development Goals that expired this year. For the first time, these goals mention older adults, aging, and the importance of creating opportunities for people of all ages and abilities. With a commitment to “leave no one behind,” the Sustainable Development Goals hold tremendous promise for older adults and persons with disabilities across the world, in large part thanks to the advocacy of civil society organizations.

I had the privilege of representing the United States in a dialogue on “Tackling Inequalities, Empowering Women and Girls and Leaving no one Behind.” We heard from heads of state, leaders of non-governmental organizations, and many other concerned global citizens about how we can work together to support vulnerable groups, and ensure equal access to education, health care, and social protection. We discussed the need for rigorous data collection, and why we need to prioritize the empowerment of marginalized women and girls, starting with a commitment to promoting social norms that value the human rights of all people—regardless of age or ability. As the only member of the U.S. delegation from the Department of Health and Human Services, I found it invigorating to be a part of conversations focused on human rights bolstered by arguments for universal access to health care, including protection from violence and abuse.

The issue of violence and how it undermines a person’s ability to thrive was an important theme at this year’s UN General Assembly, and one that was consistent throughout the statements made by world leaders at the “Global Leaders’ Meeting on Gender Equality and Women’s Empowerment—A Commitment to Action,” hosted by UN Women on the last day of the Sustainable Development Summit. This celebration of the 20th anniversary of the Fourth UN World Conference on Women in Beijing brought together member states to commit to ending gender discrimination by 2030 and announce concrete and measurable actions to make a difference for women and girls in their countries.

I was glad to hear the recognition of impact of violence on equality. It took decades of tireless work by advocates to bring the issue to the global agenda and the shared focus of so many leaders is an extraordinary accomplishment that paves the way for real change.

However, I was disappointed by the relative invisibility of older women, and women and girls with disabilities in the leaders’ statements—particularly on the issues of violence and abuse. Twenty years ago, delegates in Beijing took great care to intentionally include older women, and women and girls with disabilities, with specific references to their rights to health, resources to seek safety from violence, and economic security. For example, paragraph 116 of the Beijing Declaration and Platform for Action urges countries to pay special attention to marginalized groups of women, including older women and women with disabilities, with regard to the issue of gender-based violence. I had hoped to hear this specific inclusion reflected in the statements at the global leaders’ meeting, because overcoming the long history of overlooking these populations in human rights initiatives will require specific and deliberate effort.

While it is clear that we still have a great deal of work to do, the world is finally starting to take note of the contributions and concerns of older adults and people with disabilities. Advocates for these under-represented groups played an important role throughout the Sustainable Development Summit.  I am proud to have been among them, and I am looking forward to continuing our work to ensure the human rights many of us take for granted extend to all people, throughout the lifespan, regardless of age or ability.

This is really great news.