A woman blessed by the ADA 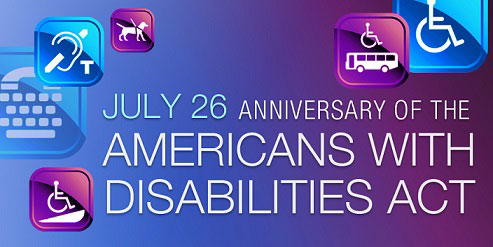 Maria von Trapp writes in her book, The Story of the von Trapp Family Singers, about her youngest son's first communion. Johannes gleefully announced, “Now it’s MY turn; now I am coming for a change.” In other words, "I am going to participate. I won't be left behind."

Similar thoughts went zinging through my brain during the Senate and House debate and ultimate passage of the ADA in 1990. When it was signed into law by President George H.W. Bush, I was beside myself. I realized that my opportunities were more open than they’d ever been.  On par with the Civil Rights legislation of the 1960s, the ADA meant that I could not legally be barred from full participation in any activity by architectural barriers or any other reality associated with having a disability. It meant that the 14th Amendment fully applied to me as a woman with a disability. It meant that my voice fully mattered; my civil rights recognized and codified into law.

Having my voice be heard and mean something was not a new concept to me. I was fortunate to be raised in a family that encouraged me to speak my mind, regardless of minimization I would face elsewhere, because I was different in ways that I did not choose and could not change. The long line of strong women from whom I come also made sure to the best of their ability that I could fully participate in any activity that caught my fancy. My maternal grandmother taught me to read when I was three, giving me a refuge from the taunts of neighborhood children and classmates because they didn’t understand why I wore different shoes or couldn’t do all the things they did in the same way. My paternal grandmother taught me to laugh in the face of whatever came. My mother made sure I was disciplined, learned social skills that included proper table manners and how to put outfits together, and adopted a deep and abiding faith that would bolster me through whatever came my way.  They made sure I never saw myself as “less than.”

It never occurred to me that not everyone had someone who encouraged them in such a way. It never occurred to me that other children with disabilities did not get to participate as fully as possible in every activity. My high school years were a bit of an awakening for me. For the first time, I was not the only student in my classroom, or my school for that matter, with a physical disability. Additionally, I was shown for the first time through the magic of video what I looked like when I tried to walk. Both things were brutal realities. With the realization that other people with disabilities did not have the support system that I had, I felt grateful, humble and undeserving all at once. Why was I so blessed while others were not?

With the realization that I looked different from others when I ambulated, I felt simultaneously ugly, shocked and entertained.  All the ridicule suddenly made sense as I saw myself through the eyes of others.   For the first time, I questioned why I’d been encouraged to try to keep pace with my able-bodied classmates. Once again, my support system was there for me, helping me keep trying. Instead of giving up, I snarked back, “Weebles wobble but they don’t fall down.” I was thankful for my support system, but my heart hurt for others who had no one to encourage them.

Armed with these new realizations, I went away to college and found my place there, especially in the worlds of advocacy, volunteerism and politics. I determined to do everything I could to give voice and presence to those who did not have the same support system I did. One of the ways I accomplished that was by working on campaigns and in the DC offices of my state’s Congressional delegation while still in college. I got to watch the ADA come together and make its way to the President’s desk. It was thrilling. All Americans would now truly be equal under the law.

When I was sworn in as the AoD Commissioner on June 12 of this year, it was as if all of the beautiful and messily layered pieces of life fell neatly into place. I am happy to ride an accessible Metro system to my full adapted office each day where I represent people with all disabilities as a member of the Trump Administration. All of the professional experiences and skills I have are put to use on a daily basis. I am a woman most blessed because of the ADA, and I want to express my gratitude. Thank you to all the advocates who came before me to fight for the rights of people with disabilities. Thank you to Senator Tom Harkin for championing the bill, and to all of Congress for the bipartisan support it received.  Thank you to President George H.W. Bush for signing it into law. Thank you to everyone who played a role in the passage of the ADA for your part in my amazing real life, struggles and all.

Fair warning: Buckle up, y’all! My life may be in place, but I am just getting started because I believe that every American with a disability should have the same opportunity I have had for the self-determining journey of life, liberty and the pursuit of happiness. Partner with me, my fellow Americans with and without disabilities, and let’s make it happen!

Presidential Proclamation for the ADA Anniversary

ACL employee Deb Cotter tells her story as part of the I Am HHS series, a multi-part video series that highlights employees’ stories of their service, dedication, and discovery working for HHS.

Mrs. Ortiz,
As I read your commentary I was inspired and reminded of how far we still have to go at the same time. Even though the ADA was signed into law in the 90s, and a number of accommodations are in place there is still the adjustment of many hearts and minds that need to continue to take place. In my work as a Clinical Psychologist, I often see the other end of the spectrum with persons that have cognitive, emotional, and psychological disabilities. Mental health still carries with it a stigma of shame where patients are often ridiculed and even disbelieved by their own families. Symptoms are seen as "not real; only occurring within a certain class of people", or most devastatingly, "only occurring within a certain race of people." While not shocked by these erroneous beliefs, after working in mental health for nearly 20 years, I have encountered patients faced with challenges similar to your own, leaving patients to ask themselves questions such as where do I go for help for myself or a family member, asking what type of community supports are available, and how can I just live a "normal life?" It is only through a partnership between the advocacy that your office provides and the services that professionals such as myself provide, that we as a country can even begin conversations that "drill down" the needs and services that would make easier the burdens of mental illness on individuals and on our communities. I encourage you to reach out to those "on the ground" helping to fight the battle against ignorance of mental health needs, abilities, and services as we all are fighting some kind of battle and will only be better as a community if we face mental health issues head on and make a broad range of service provision a priority for all!