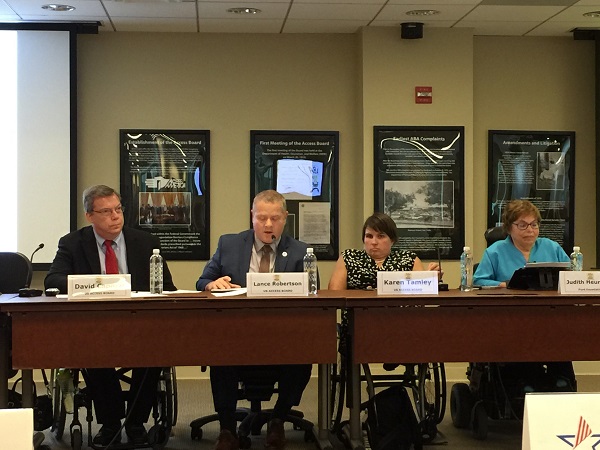 As chair of the U.S. Access Board, I had the privilege of participating in an event today celebrating the anniversary of the Architectural Barriers Act (ABA) of 1968 and the fifty years of progress it helped spark.

Before the ABA was passed, accessibility standards were often inconsistent -- and just as often ignored. The American National Standards Institute developed the first accessibility standards in 1961 with the help of Easter Seals and the research of the University of Illinois. Many states used these early standards to develop accessibility requirements in their building codes. However, other states adopted access requirements that ranged from lax to nearly nonexistent. This resulted in great discrepancies in accessible design requirements from state to state, and in some cases, from city to city.

This had real life impacts. It meant that a wheelchair user could easily go to the post office in one town but not in a nearby state or community. The same problem existed with respect to sidewalks, entrances, bathroom stalls, paths of travel, signage, and everything else that makes a building accessible.

The Architectural Barriers Act helped solve this problem by creating a mechanism for developing and setting clear and consistent nationwide accessibility guidelines for the federal government. It literally began to open the doors of government to Americans with disabilities like never before by requiring buildings constructed or renovated with federal funds, as well as those owned or leased by the federal government, to be accessible and usable by people with disabilities. For the first time, schools, housing, offices, courts, hospitals, stadiums, post offices, and countless other facilities were available to people with disabilities.

This did far more than eliminate physical barriers. It helped level the playing field by promoting greater access and equal opportunity to public education, colleges and universities, community living, employment, health care, and more. In this way, the ABA helped pave the way for the last five decades of civil rights advances for Americans of all ages with disabilities.

One of the law’s lasting legacies is the innovation in design and technology it helped spur across the private, public, and nonprofit sectors. Over the years, the National Institute on Disability, Independent Living, and Rehabilitation Research (NIDILRR) and the Access Board – together with many other federal agencies – have invested significant resources, time, ingenuity, and rigor in generating and effectively sharing new knowledge to improve the opportunity and ability of individuals with disabilities to access the built environment, technology, and the digital world.  The quest continues and so does the return on investment.

We at ACL are especially proud of the important role the Access Board and NIDILRR have played in advancing the science, discipline, and esthetic of what we now call universal design. Universal design uses a broad-spectrum of ideas and methods to design and develop buildings, products, and environments that are inherently accessible to all people of all ages and abilities.

As he was signing the landmark Americans with Disabilities Act into law in 1990, President George H.W. Bush said the law would take a sledgehammer to the shameful wall of exclusion that has prevented far too many with disabilities from exercising their full rights and responsibilities. It is important to recognize and celebrate that the first blow against this wall was struck by the Architectural Barriers Act and those that made it possible.

We are a better nation and a better people because of it, and we remain committed to advancing the principles behind it.